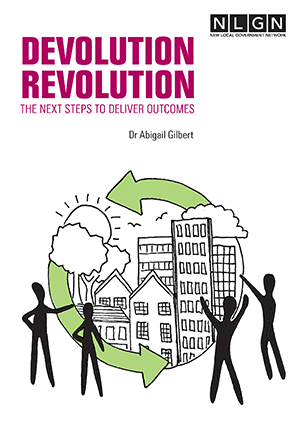 Devolution Revolution: The next steps to deliver outcomes

Central Government need to be much clearer about what they want from devolution and much more willing to create the conditions to achieve it. This is the key finding from a new research report from NLGN supported by PwC. The findings come from an intensive 48-hour ‘gaming’ session based on a realistic but fictional Combined Authority undertaken by leading Chief Executives, politicians and thinkers.

For devolution to work Government need to be much clearer than they have been with established and potential combined authorities about what they want to see from them – and what they don’t. Equally, local government must be much more willing to take risks and to evidence the results of devolution.

The “us and them” approach that has stymied relationships both between local and central government, and attempts to democratise devolution, needs to end. We need to move from a hierarchical approach to one of equal but different spheres of influence. This will require a range of measures including a more flexible approach to shared resources (such as assets and workforce); place-based visions that allow the differences between councils within combined authorities to become an advantage; and ongoing democratic conversations to ensure public buy in.

“It is clear to us that the distrust between central and local government continues and is still hampering our ability to devolve power in the way places need to build sustainable futures. It is vital that practical steps are taken to be more transparent about this relationship and open up discussions – including what the parameters are – so that everyone can be clear about what is on the table.

“Central government have got to learn to let go. But to do so, local government have to demonstrate not only that they are willing to take risks, but also that they can and will evidence what works. It will be by doing so, and by working together as equals that the devolution process will evolve to the next successful stage.”

“Devolution continues to set the agenda for local government, offering opportunities for councils to work in different ways. However, with many devolution deals still on the negotiating table, central government has a role to play in casting light on the practicalities of turning the devolution revolution into reality.

“While re-setting relationships with central government is important, what is needed is a mind-set change on all sides for devolution to be successful. The need to move beyond an ‘us and them’ approach applies to how local authorities work with their neighbours, with other parts of the public sector, with business, and with the public.”